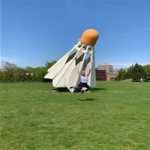 Hi, I’m Ann, and welcome to my KC adventures! I don’t know about you all, but my family has been getting out for a lot more walks lately.  At first, we were just exploring our neighborhood and parks close by, but this week we got a little more adventurous! We walked around the Nelson Atkins Museum! 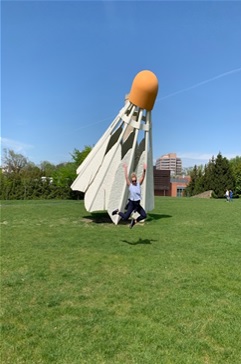 Walking on the museum’s beautiful grounds was both relaxing and stimulating.  It made me curious as to why, we Kansas City, had these four huge badminton shuttlecocks laid about our museum’s north and south lawns.

I discovered that when this exhibit was first installed in 1994, they were not welcome with open arms.  Instead, many people saw them as “trash”.  The four shuttlecocks were designed to unite the large museum lawns.  Each of the separate lawns represented one side of the badminton court and the actual museum represented the net.

Who knew that the largest shuttlecocks in the world actually had a purpose?

This looks really neat during the day, but each of these moons is actually a skylight to the parking garage below so at night, the lights from the parking lot make the moons glow.

The Nelson commissioned this by Walter de Maria in 2002, but it took the artist and a team of engineers and architects to bring the art to a reality. 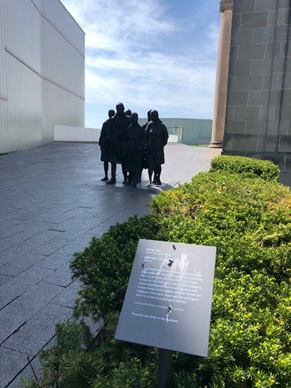 “Rush Hour” is a bronze sculpture that sits near the north entrance to the museum.  I found this to be especially interesting now as it was done by George Segal in 1983 and is a compilation of anonymous figures.  He wanted to show “the deep isolation that can occur even when we are surrounded by others.”

At a time when we are being forced to stay at home, I found this to be so perfect. It’s really a neat piece because as you get closer the people could be from today or 100 years ago.

It’s strange to think that we aren’t alone in our current struggles, people have been through rough times in the past and we will again in future. Let’s just remember to keep looking out for one another so no one has to feel alone! 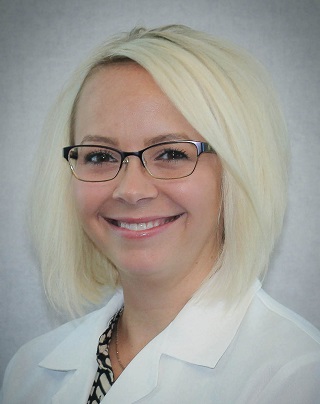 Well, I hope you all enjoyed some of the fun things my family did! What a great time to go out and explore our own amazing city!